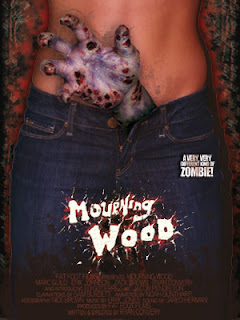 Synopsis: The unveiling of Dr. Jacob Pendelton’s newest product, ShamPube, becomes a blistering catastrophe when it transforms the Slutton residents into ‘humping’ zombies. Now, it’s up to an infomercial king, a used car salesman, four friends, and an array of peculiar townsfolk to join forces and stop the invasion. Prepare for the rise of Mourning Wood!

My Thoughts: I’ve always thought that horror-comedies were the toughest of all the horror sub-genres to pull off effectively. A good one is so rare that when I hear of one being released I tend to avoid it until I’m told otherwise (e.g. 2009’s ‘Doghouse’). Well, producer/director Ryan Convery and his crew really got it done here. I hope this doesn’t make me sound like a total douche-bottle, but this was as much fun as I’ve had watching a zombie flick since ‘Shaun of the Dead’. Yeah, that sounded kinda lame. F*#k it, it’s still true.

There’s really something to be said about the comradery between these guys. The sarcastic wisecracks and insults were as funny as the scripted jokes. Those wisecracks that seem effortless take guys years to perfect, not to mention the nonchalant reactions by the insulted friends. Believe me, I can call some of my buds a f*#kin’ dickhole in front of their Mom and they won’t even bat an eye. As a guy, I can appreciate that and in this movie it really shows.

In the ‘making of’ segment on the DVD’s special features, Ryan emphasizes that anyone can make a movie and to just go and do it. I agree with that, though not everybody can make a movie like this one. This is no doubt a low-budget movie, but it was made by some very talented people. It was shot and edited extremely well, not to mention the sound and music editing was incredible. Also, I can’t remember the last time I watched a low budget flick that didn’t require me to adjust the volume level at least a hundred times during the movie. There’s also some totally badass claymation that fits in perfectly during the opening title sequence.

This Ridiculously Twisted Zombie Flick Is For Fans Of Perverted Toilet Humor Only! If you’re easily offended this isn’t for you. Otherwise, if you’re one of the cool kids, then I highly recommend it. Without this film I might have never known that trees didn’t have vaginas.